E-cigarettes are battery operated devices that are used to vapourise an e-liquid into vapour which is then inhaled. Also known as vape kits or e-cigs, these were invented to replicate tobacco smoking, in what is believed by many to be a safer alternative. These vape machines have evolved with technological advancements since their invention and we're here to cover the basics of what an e-cigarette is.

"It’s become one of those things- like Wi-Fi. You’re so busy finding the best deal, you’ve forgotten what it actually is"

They should totally define Wi-Fi as “wireless fireless.” Mostly because it would be like an e-cigarette. Also, just...they should. From the people who don’t sell Wi-Fi, hi.

You know it’s advanced when people have entire YouTube channels devoted to something called a Wotofo Phantom. If you’re still one of those people who doesn’t have a clue what an e-cig actually is, the Wotofo Phantom isn’t a version of the Rolls-Royce Ghost. The Phantom is amech mod- the Sheldon Cooper of e-cigarettes. Sheldon was unavailable for an in-depth, Penny-style breakdown of electronic cigarettes, so you’re stuck with us.

ELECTRONIC, BUT NOT A CIGARETTE (GOOD JOB, WHOEVER NAMED IT)

Quite what’s going on with the name? If you haven’t figured out that electronic cigarettes aren’t actual cigarettes, bear with us. That’s one giant rock you’ve been living under, so we’ll need a team to lift it.

“E-cigarettes are:Battery-operated, hand-held devices that resemble (but are not) tobacco cigarettes, cigars or pipes. Their purpose is to vapourise liquid into vapour electronically. ” 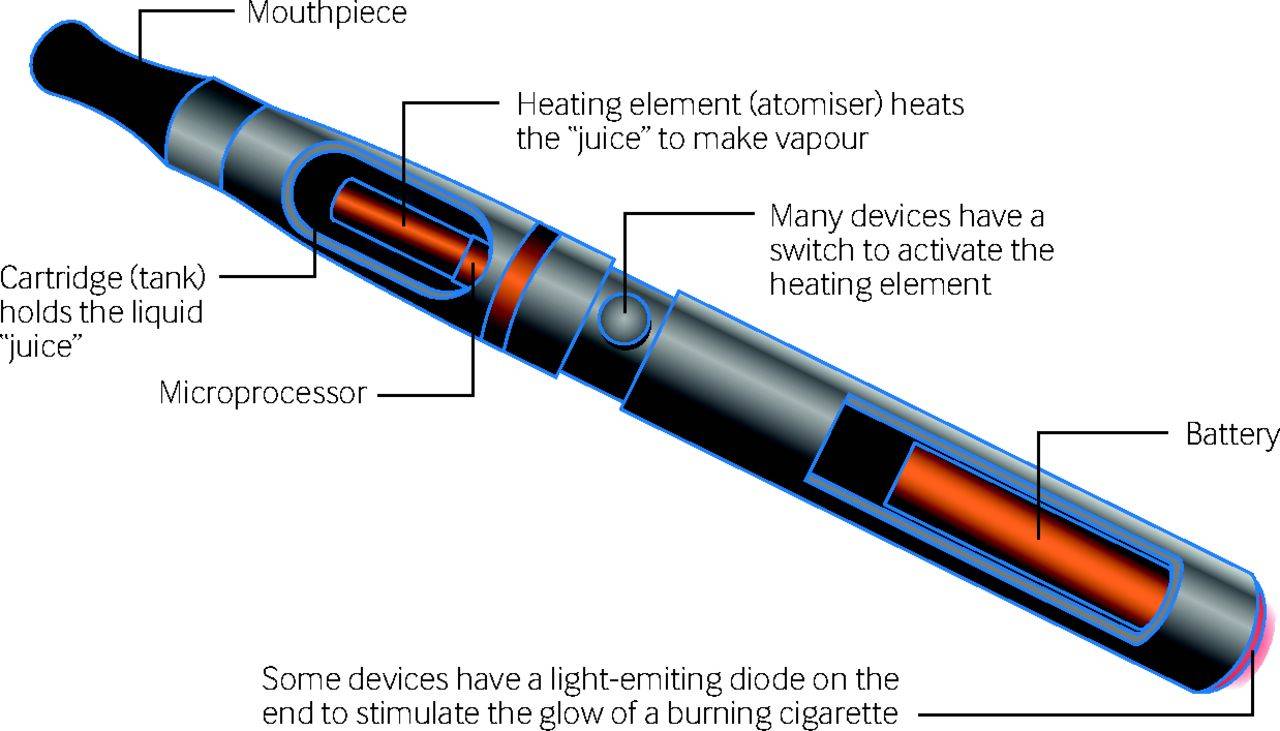 The mechanism mostly goes like this: You suck on the mouthpiece (drip tip), a sensor activates the device’s heating element, and the nice, flavoured juice in your tank goes from e-liquid to vapour. That’s what allows the “inhale, exhale” experience, the intake of nicotine (if you choose to vape with it), and the chance to become someonelike this.

NO, THEY AREN’T POWERED BY IRON MAN

Whether you’re holdinga SMOK Alien or a Uwell Caliburn G, you’re looking at a similar setup. Whacking on variable wattage, voltage, and adjustable airflow are the whistles and bells, but the bread and butter of how e-cigs are composed has stayed the same. You’re looking at five main components.

WHY DO YOU BUY AND USE E-CIGARETTES?

The aim of e-cigarettes was to find an alternative to smoking. It still is. E-cigs aresomething that over 3 million Britsare now using, and a significant percentage of them are either quitting smokers or fully #Done.

“Done smoking”- like you haven’t heard that one before. Every year come January, tens of millions of Brits get up off the sofa. They clear up the last of the Celebrations wrappers, try not to feel too awful that the mince pies were eaten by the box, and yes, the resolutions will come.

Along with cabbage soup diets (has anyone lasted longer than a week on this?), quitting smoking is always up there. These days, that’s turning into stubbing out the fags and picking up the vape.

THE ORIGIN OF THE E-CIG: ONE GUY AND A BRAINWAVE

The e-cig as we know it was officially invented in 2003. Hon Lik is the Chinese pharmacist who watched his own father die from smoke-related disease. A smoker himself, Hon made it his life’s work to build an alternative.

Hon Lik, inventor of the e-cig. 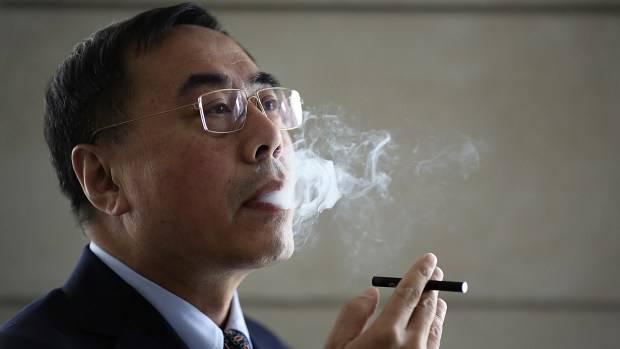 The piezoelectric, ultrasound-emitting element Hon Lik invented to vapourise pressurised liquid got him a patent, but the idea itself goes back to the 1920s.

1927’s archives are pretty dusty (that’s what you get for smoking everywhere). Dig deep enough into them though, and you’ll find Joseph Robinson’s “electronic vaporizer holding medicinal compounds which are electrically (or otherwise) heated to produce vapours for inhalation.” The medicinal part? It was 1927. The dangers of smoking tobacco products weren’t known yet. People were probably still using smelling salts to #Deal, but the idea was there.

The 1960s were way too dominated by Big Tobacco to give this thing a chance, but 1963 saw another stab at the e-cig attempt from Herbert A. Gilbert- he filed a patent for the vapourising of a flavour cartridge.

Fast-forward to 2003, and you’ve got your first e-cig. In 2007, vaping devices started getting more recognition in the US and the industry really took off. Devices now are a million miles from what they were back then- as are vape e-liquids.

“Ask an old-school vaper what liquids were available back in the day. They’ll answer you in one-word chunks: Tobacco, strawberry, mint. Now, you’re looking at everything from cereal and donuts to pistachio crême brulée.”

TYPES OF E-CIGARETTES: FROM 1ST GEN TO NEXT-GEN-TECH

If you were an early e-cig user, this might sound familiar:

Holding a fiddly, cigalike device that was basically the only thing a pharmacy could sell you. It came in one size, power was a joke, and for something that looked like a cigarette, it wasn’t half heavy. You’d walk around trying to hold it between your fingers, spend your life dropping it, and you’re probably glad that the #NewDrop finally came.

It doesn’t matter if it’s Adidas or Amazon. Big brands got big for a reason. Since we seem to have gone on a supermarket tangent, here’s something everyone can relate to. The UK has the “big four”. Chances are, you shop at either Tesco, Sainsbury’s, Asda or Morrisons. Vaping has a similar deal.

“Vaping brands generally don’t need to offer you Nectar Points. If you’re reading this, chances are, you’re already loyal. We’re all up on the product doing the talking, but we haven’t forgotten the rewards. Join VapeSuperstore’s VapeClub today for liquid cash rewards, freebies, and more.”

Of course, you’ve got your Waitrose and M&S. Your artisan butcher and your hometown hero. We stock everything from Kanger and MyBlu to our own, in-house Vape Superstore liquids. If you’ve eyed these up while shopping for juice (but still don’t know what to try), a safe bet would be the three we continually moan about having to “prioritise for the customers” (yeah, we’re kinda greedy).

VS Frozen Berries, Blackcurrant, Raspberry & Lime and Vanilla Coffee are all 4 for £10.

2017 feels a while back. Ariana Grande was still building up that ponytail. Travis Scott wasn’t yet rapping about “ridin’ through the clouds” (or “going through the vapors”). What 2017 did bring though, was TPD: the Tobacco Products Directive.

“It’s no secret that vaping brought Big Tobacco the first real dose of #Competition ever. A lot can happen behind closed doors. TPD was the result”

The “most lobbied dossier in EU history”. That’s one way to put it. In what is largely accepted to have been some pretty fat suitcases of cash thrown at the government, Big Tobacco lobbied their way into squashing the vape industry. At least, as much as they could. The EU vaping industry is now TPD-compliant (as are we).

“YEAH, I KNEW ALL THAT. COOL BEANS, BUT I KINDA CAME HERE FOR JUICE AND MODS”

First off, you’d be surprised how many people don’t know as much as you. If you earned your Level 1 certificate in vaping basics years ago, thanks for taking the time to read. Now you can reward yourself with the actual goodies.

If you need help in choosing the best electronic cigarette, pop into any of our vape stores or get in touch. For exclusive offers, promos and savings, follow us on Facebook, Twitter and Instagram.