Since the the Tobacco Products Directive (TPD) and its associated regulations are in full swing, serious requirements have been put in place for e-liquid manufacturers. One of the changes these regulations had related to nicotine-containing e-liquids. Liquids that contain no nicotine are not currently covered under the first draft of the TPD. Because of this loophole, manufacturers have already devised a very clever method that allows them to continue doing business in almost the same way as before. The regulations required any new e-liquid with nicotine to undergo testing. To get around this expensive and slow process, now manufacturers only need to get nicotine shots tested instead. The result? Vapers can still enjoy large bottles of juice with nicotine in them without any extra cost.

WHAT IS A NIC SHOT?

Nic shots are small, 10mL TPD compliant bottles of unflavoured nicotine e-liquid. Not intended to be vaped on their own, they’re made to be mixed with larger bottles of nicotine free e-liquid. When combined, you get the same large juice bottles you’d get pre-TPD. TPD regulations only apply to nicotine-containing e-liquids.

Since the unflavoured nic shot is the only part of the package containing nicotine, the manufacturer needs only to test the nic shot in order to be compliant with the new rules.

WHY SHOULD I USE NIC SHOTS?

The main way the user was impacted by TPD regulations is the maximum bottle size limit of 10mL for any juice containing nicotine. Larger bottles are usually more convenient. Most vapers really don’t like having to carry around multiple 10mL bottles of the same flavour when one large one would do. Nic shots get around the 10mL bottle requirement without violating the letter of TPD law. They’re more cost effective, use less plastic and are a great option for sub Ohm vapers who use a lot of juice.

SAVING THE INDUSTRY FROM GOVERNMENT REGULATION

One of the biggest fears around new regulations before they were implemented was that they would stifle innovation. With every new flavour requiring an expensive and time consuming testing period, it was going to dramatically reduce the number of e-liquid varieties available for purchase. Nic shots changed all of this as they allowed businesses to continue as usual with regards to VG, PG, and flavour additives. The reason is each manufacturer only needs one general test for their unflavoured nicotine-bearing juice. Those looking to buy a 10mL TPD-compliant bottle of their favourite juices might not be able to find every flavour from every manufacturer available with the nicotine already inside it. However, manufacturers will still be able to offer every flavour from their juice lines in large bottles with a little extra space for the nic shot.

HOW TO USE A NIC SHOT

Pre-TPD, if you bought a 100mL bottle of nicotine-containing juice, you’d get a pre-mixed bottle full to the brim with your chosen flavour of e-liquid. With nic shots, they still come with 100ml of liquid but now, they’ll come in a 120mL bottle with some empty space at the top. This space is there to accommodate your nicotine shot (or two). If you’re not sure how to get just the right strength for you, we have put together a handy nicotine shot calculator. Designed to help you figure out how much nic shot to add to your bottle to achieve your desired nicotine level. Roughly speaking, you will need to add 17.25mL of 20mg nic shot to 100mL of juice to achieve a nicotine level of 3mg. This amounts to slightly less than two full nic shots per 100mL

WON’T ADDING 10ML OF UNFLAVOURED NICOTINE E-LIQUID TO MY JUICE DILUTE THE FLAVOUR?

Luckily for you, the juice manufacturers who support the use of nic shots have already thought of that. When you buy a 0mg bottle not intended for use with nic shots, the flavour concentration will be the same as it was before the TPD regulations came into effect. When you buy a short fill e-liquid bottle, designed to be combined with a nic shot, the flavour concentration in the bottle will be noticeably higher. This counteracts the dilution contributed by the addition of extra unflavoured e-liquid.

Thanks to the release of salt nicotine you are now not only limited to freebase nicotine shots. For those looking for a more intense nic hit, you can now purchase nic shots with salt designed for those using lower powered devices.

Alternatively, for you menthol lovers go for a nic shot with an added menthol blast.

Step 1: Get a pen and mark halfway down the height of the nic shot. All nic shots come in 10mL TPD-compliant bottles, so this halfway mark represents 5mL of nicotine-containing e-liquid. Once you’ve marked the halfway mark, mark again two more times, halfway above and halfway below the first. Each of these lines now represents 2.5mL of unflavoured nic shot.

Step 2: Figure out how much to add. Find a TPD nicotine shot calculator on the internet and input the size of your 0mg bottle, the strength of your nicotine shot (usually either 18mg or 20mg), and your desired nicotine level. The calculator will spit out a number. In the case of a 100mL bottle, 20mg nic shots, and a desired nicotine level of 3mg is 17.25mL of nic shot. This amounts to one full 10mL nic shot and slightly less than three quarters of a second, which you’ve already marked with a pen in step one.

Step 3: Unscrew your 0mg juice and slowly drip in your nic shot until you’ve reached your desired nicotine level as dictated by your online calculator in step two. It’s not a bad idea to test your e-liquid for flavour and nicotine potency throughout the mixing phase.

Step 4: Give the bottle a vigorous shake, test, and enjoy. Giving the bottle a little shake now and again helps make sure everything is evenly blended throughout. 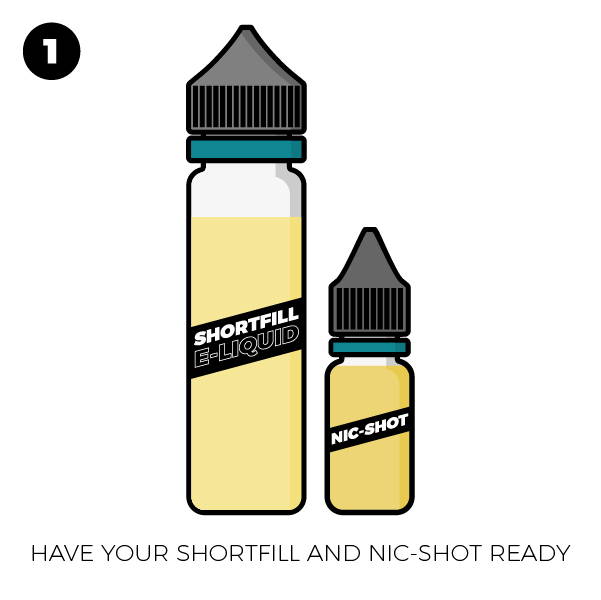 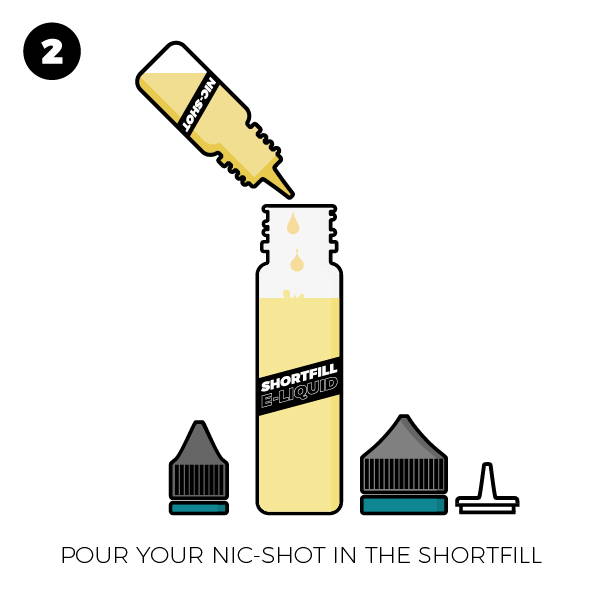 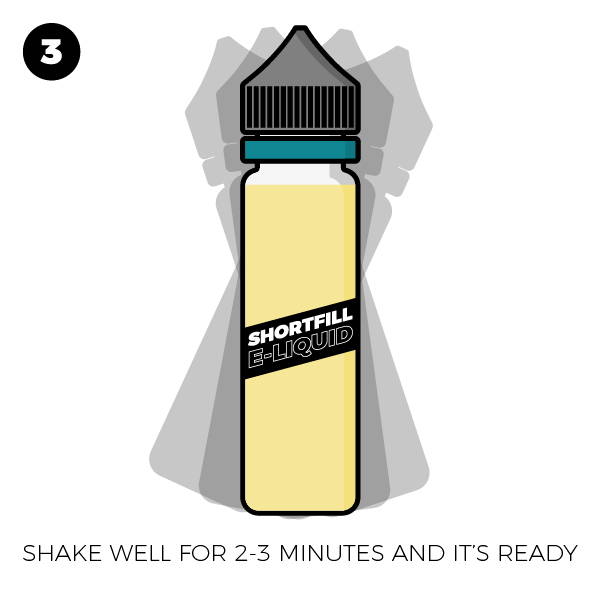 ﻿www.vapesuperstore.co.uk contains general information about vaping and vapour products. The information provided is not medical advice, and should not be relied upon unless explicity cited. We do not make any warranties surrounding the health benefits, reliability and accuracy of written copy across all pages on our website, including blog content and content posted on social media.

Sign up to our newsletter and receive 10% off your first order.
You can unsubscribe at any time.